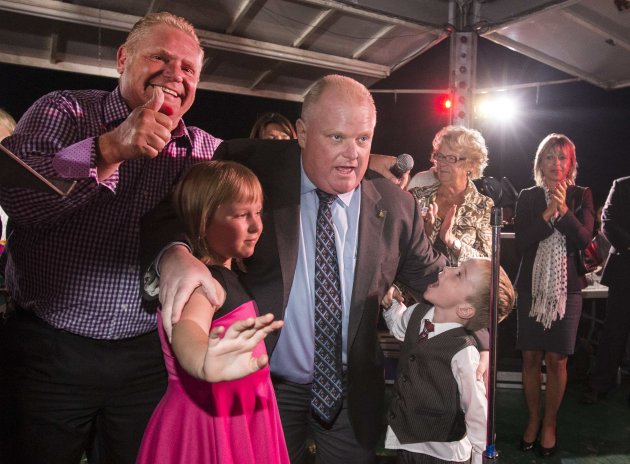 A defiant Toronto Mayor Rob Ford returned to the public spotlight Saturday, talking tough about the cancer racking his body by saying he’d take it “out the back” and get rid of it like he did his substance abuse problems.

Ford mounted a small stage at his family’s annual barbeque party and, backed by Tom Petty’s hit “I Won’t Back Down,” told a boisterous crowd of hundreds that he was going to triumph over his latest struggle just as he successfully tackled substance abuse during a stint in rehab that ended three months back.
“I had a guy I was looking in the mirror every morning and saying, you know what I can’t beat this guy.

Wherever I went, that guy was there — and he was beating me every time — so you know what, I took that guy out the back, and I took care of him,” Ford said, his voice sounding hoarse at times.

“A couple weeks ago, the doctor came up to me… He says, we got someone bigger and badder than that, and I said, who’s that guy? And he said cancer,” Ford told the crowd.

“I said, you know what, go tell cancer that I’m going to put him where I put that guy in the mirror three months ago.”

Doctors detected a tumour in Ford’s abdomen and he is now undergoing treatment for a rare and aggressive form of cancer. He was released from hospital this week after undergoing chemotherapy and further treatments are planned.

Ford bowed out of the mayor’s race this month, but is instead seeking a seat on council. His brother, Doug, has now jumped into the Oct. 27 mayoral contest in his place with Ford’s enthusiastic approval.

Saturday’s burgers-and-pops barbecue public party came exactly one month before the election. Ford was out one night prior doing some door-to-door campaigning.

Long lines of hungry Ford fans snaked away from a busy grill, while shorter queues formed to nab Rob Ford bobblehead dolls, with proceeds going to his brother’s mayoral campaign.

Though the crowd’s spirits were high, the ailing mayor’s health loomed large over the event.

Supporter Leo Robinson, clutching a sign slagging a mayoral rival, said although Ford was battling a rare cancer, he shouldn’t quit politics but rather keep at it and stand up for the little guys.

“And that’s what he’s doing — and that’s important.”

“It shows me that he believes in the city — he’s strong enough to fight for the city,” she said, standing next to the meal line.

“A lot of people would drop out. He cares to the point of putting everything else behind him. I wish he succeeds.”

Ford gave heartfelt thanks to his supporters, known in Toronto as “Ford Nation.”

“Every single person has had personal problems in life,” he said. “You find out who your real friends are and Ford Nation has never wavered one iota.”

Ford became an international celebrity last year after months of scandal, including admitting to using crack cocaine during a “drunken stupor.”

He has repeatedly said he’s not a drug addict, but entered rehab for substance-abuse problems this year. Council voted to strip him of most of his powers last year and his role has largely been symbolic.