The most loved and hated airlines according to Twitter 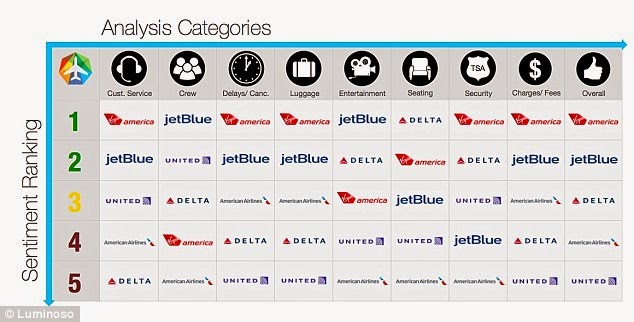 At least according to a new study, measuring the popularity of - and distaste for - the major US airlines on social media.

JetBlue was in second place overall, followed by Delta.

And while United Airline was praised for its crew, the same could not be said of customer feedback about delays and cancellations, luggage restrictions and charges and fees.

American Airlines were not too popular either, scoring badly on crew, entertainment, seating and security.


Many people find complaining on Twitter can be productive, especially now that airlines and travel companies have social networking teams to respond.

But some online complaints - even those directed at a specific company - will go unnoticed.

The new technology, created by a company called Luminoso, allows companies to analyse data from large amounts of tweets, so they can easily see feedback from customers.

Its website explains: 'Luminoso is based on a learning algorithm that understands words contextually, rather than relying solely on their dictionary definitions, and sorts them by their meaning.

'So instead of just finding the key words, Luminoso can find the key concepts, ideas, thoughts, and feelings that drive your consumers' choices.

Words such as 'hate' would drive down an airline's raking in the luggage category while 'love' in conjunction with 'wifi' or another aspect of their service, would increase its popularity.

Posted by Buzzcanadalive at 2:00 AM