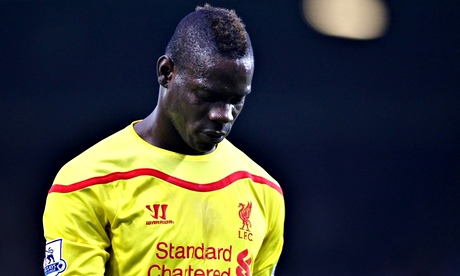 Merseyside police are investigating after the Liverpool striker Mario Balotelli was the victim of racial abuse on Twitter on Sunday following his reaction to Manchester United’s shock collapse at Leicester City.

Balotelli, a member of the Liverpool side who lost 3-1 at West Ham United on Saturday, tweeted: “Man Utd...LOL” as United headed to a 5-3 defeat at the King Power Stadium. His tweet was met by a string of racist messages, including one from an account called @CraigSainsbury which included the n-word and concluded: “Got eat some bananas and get ebola you dirty monkey.” The account from which the tweet was sent subsequently appeared to have been closed.

The abuse brought a response from Kick It Out, the anti-discrimination group. It wrote on its Twitter account: “Kick It Out is aware of racist tweets directed @FinallyMario and will be reporting to the authorities. Thanks to all who have alerted us.”

Balotelli has been singled out for racist abuse in the past. He was heckled by Italy supporters during a pre-World Cup training camp in May and was on the receiving end of numerous instances of racist abuse during his time at Internazionale and, more recently, Milan.

Balotelli spoke about the abuse directed at him in an interview with GQ magazine in July. “They aren’t used to seeing people who are different, not white, who act not as rebels but normally,” he said. “I think what the ignorant people don’t like is that people who are different are allowed to act that way. These stupid people, they get angry with me, they say horrible things, but I haven’t done anything different from other people.

“I have made mistakes, like everyone does, and I have always paid for my mistakes. I think that if I was white maybe some people would still find me irritating or annoying but it wouldn’t be the same. Absolutely not. Jealousy is a horrible thing, but when this jealousy is towards people who are different from the majority, and who maybe also have more than you, then it becomes anger, it becomes rage, and that’s the overt racism.”

The former Liverpool player Stan Collymore is among others within the game who have been victims of racism on Twitter.