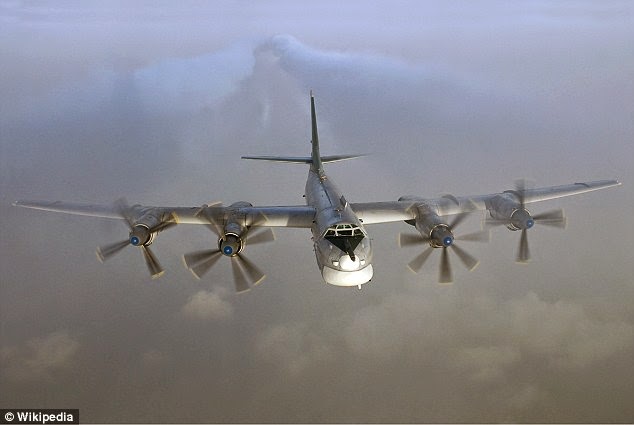 A spokesman for NORAD and NORTHCOM added: 'We do not see these flights as a threat.'
NORAD, a bi-national American and Canadian command is responsible for air defense in North America.


This latest incident took place as the US and Russia are increasingly at odds over Ukraine, where Russian-backed separatists have been fighting for control of parts of the former Soviet state.
This week, Ukrainian President Petro Poroshenko secured over $50 million in U.S. assistance during a visit to Washington but did not clinch U.S. weapons his soldiers might use to fight the separatists.

Poroshenko also visited Canada this week and received aid in the form of a C$200 million ($182 million) five-year loan.
Meanwhile, a spokesman said today that Royal Air Force jets were also deployed from Scotland to intercept Russian military 'Bear' aircraft that were flying too close to the airspace it guards.
Aircraft based at RAF Lossiemouth, based in Moray, were sent to identify the aircraft - Tu-95 Russian Bear H bombers - that were spotted in international airspace.

AP
Posted by Buzzcanadalive at 3:00 PM