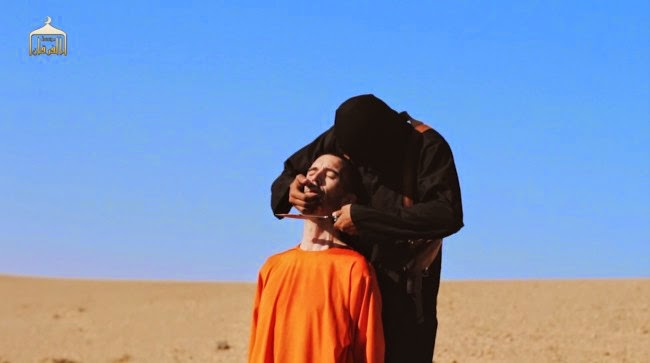 Prime Minister David Cameron vowed Sunday to "hunt down those responsible" for the beheading of British aid worker David Haines and "bring them to justice no matter how long it takes."

Cameron was speaking a day after the militant group ISIS released a video showing the beheading of Haines and issuing a threat against another British hostage. Britain's Foreign and Commonwealth Office said it saw no reason to doubt the authenticity of the video.

Haines is the third Westerner to be beheaded by ISIS in recent weeks. Two earlier videos showed the beheading of U.S. journalists James Foley and Steven Sotloff, respectively.

Another British hostage who was shown briefly at the end of the Haines video and threatened with death was identified Sunday as Alan Henning.

Cameron called an emergency meeting of military and security chiefs after the video's release Saturday night and addressed the media from 10 Downing Street Sunday afternoon.

In his brief statement, Cameron called ISIS, also known under the names Islamic State and ISIL, "the embodiment of evil" and condemned the group's indiscriminate killing of thousands of Muslims, Christians and ethnic minorities in Iraq and Syria.

''They claim to do this in the name of Islam. That is nonsense," Cameron said. "Islam is a religion of peace. They are not Muslims; they are monsters."

Cameron said ISIS poses a "massive threat " not just to the Middle East but to the security of Britain, the U.S., Europe and other allies.

"There is no option of keeping our heads down that would keep us safe," he said.

He said the U.K. will work with the central Iraqi government to ensure it can effectively take on ISIS and will continue to supply ammunition and training to the Kurdish regional government. Britain will also continue helping the U.S. with surveillance, intelligence gathering and logistics in its fight against the Sunni extremists.

"This is not about British combat boots on the ground; this is about working with others to extinguish this terrorist threat," Cameron said.

AP
Posted by Buzzcanadalive at 8:00 AM