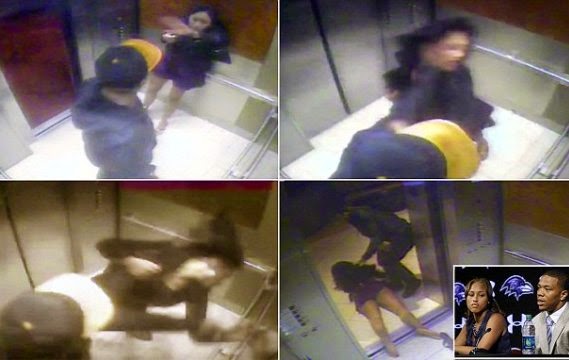 The backlash over the Ray Rice video has begun ... with celebs from all facets of sports and entertainment ripping the NFL and Rice over the new elevator knockout footage.

Seth Rogen --  I don't know much about football, but I know that Ray Rice is a piece of garbage who shouldn't be allowed to play it professionally anymore. @nflcommish your punishment for beating a woman is less than for smoking weed. Get your head out of your f**king ass.

Deion Sanders -- Instead of @RayRice27 and his Wife being the topic of your conversation today for the video let's PRAY for them and their marriage.

Michelle Beadle -- She must have used some pretty inflammatory words to deserve those punches. Two freaking games. Criminal act. Go sit in the corner.<span >Did @nfl and @nflcommish really think this video wouldn't eventually surface? That we wouldn't see that disgrace? Never too late, Goodell

Jay Glazer --  I am never speechless. That ray rice video... beyond words. Ban him now! ...
If you play a violent sport & are violent toward a woman ur right to play that sport should be taken away. Plus his callous disregard for her well being after she was KO'd is equally as disturbing. Absolutely disgraceful

Keith Olbermann --  Roger Goodell's position as Commissioner of the NFL is no longer tenable. Whether he saw the #RayRice video or he did not, he failed.

Coy Wire -- NFL Players Association should demand that Ray Rice be banned from the NFL. I'd be damned if I had to be associated w/ him.

Jason Jones -- @NFL If you truly didn't know about this video, you not only need to fire Ray Rice, you need to hire the investigative team @TMZ

Linda Cohn --  Looks like this #RayRice video was more important to discover for TMZSports than it was to the @NFL. Very sad.

Chris Kluwe --  Looks like the Ravens' strategy of "MOVE ALONG FOLKS, RAY RICE'S WIFE IS SORRY SHE GOT BEATEN" might not have been the best choice.

Lisa Guerrero -- Outrageous.  The @NFL interviewed Janay Palmer with Ray Rice in the room? Really?
By the way, the beginning of the new video appears to show #RayRice SPITTING on his fiancé before hitting her twice and knocking her out.

Ben Leber --  Not to take attention away from Ray Rice, but Goodell and his suits saw the elevator video in July. They need to be held accountable as well

Randy Cross -- So now we're supposed to believe that Rice & his counsel had access to the tape but the NFL & their NSA/Security didn't?

Skip Bayless -- Our legal system and our NFL commisisoner look so bad and shameful now that we've seen what actually happened inside that elevator.
My opinion: Ray Rice should be gone for the rest of the season.

Scott Fujita -- <>I'm glad no one this morning seems to care about yesterday's games. This piece of sh** needs to be out of the league. Period.

Brady Quinn -- Am I the only one who believes it should be a lifetime ban for the first time a player commits domestic violence? They should be done period.

Chris Harris -- The NFL should have zero tolerance for domestic violence. There is never a reason for any man to be violent towards any woman.

Duke Ihenacho -- Just so many things wrong with this situation. Spit, punch, trying to wake her up like she passed out on her own..na ain't coo

Terrance Knighton -- That man should be thrown out the the nfl and thrown into jail. Shame on those deciding his punishment. Smh
Sydney Leroux -- Yes, Ray Rice needs to be banned from the NFL but can we please get his wife some help for marrying him after the fact?

Marlon Wayans -- Watchin this @RayRice27 stuff and I say hitting a woman is not something a man should do. But I think that PEOPLE need 2 communicate better.

Sen. Richard Blumenthal --  It shouldn’t take a video to do the right thing. I commend @Ravens but urge @nflcommish to act on harsher penalties for domestic abuse. -RB

Jenn Sterger -- At least the Ravens organization has stepped up where @nflcommish fumbled. Thank you Baltimore.

Taylor Twellman --  Sorry but I'm not applauding @Ravens for today's cutting of Ray Rice because fact is he'd be playing if not for @TMZ releasing the video.

B. Scott -- The video of Ray Rice punching his fiancée, knocking her out and then casually dragging her out the elevator is truly disturbing.

David Boreanaz -- How does the @nfl not KNOW about the video in the elevator of Ray Rice? #DontBuyIt

Jeff Dunham -- No joke here: As a father of three girls, I say Ray Rice should be banned from every sport and should be serving hard time in prison.

David Clowney -- Ray Rice is a really good dude!! I don't believe he is a woman beater, I think he just made one awful mistake..

Holly Robinson Peete --  Right move. He could have killed her. Thank goodness for video. Shame NFL, law enforcement and Ravens had to be outted by TMZ... smh

Swin Cash -- It's very difficult to read some of these post blaming the victim in the ray rice situation. Disgusting!!! U have no idea how DV changes u

Mike Greenberg -- NFL teams do exhaustive research on the personal lives of players they draft in the fifth round. "We never saw it" is hard to fathom.

Terry Crews -- The Ray Rice incident occurred many times n my childhood, & I believe nothing'll change unless MEN change the culture that allows this abuse

Charlamagne Tha God -- And stop saying TMZ ruined Ray Rice's life. TMZ just doing their job. If he didn't hit her wouldn't be a video tape for TMZ to post.

Dick Vitale -- Rice CUT - The only right thing to do - #NOOTHERCHOICE

Maria Shriver -- Women's voices being heard.Take note. No place for domestic violence in the #NFL

Leigh Steinberg -- Did the NFL see the second tape that TMZ released prior to making Rice 2 game suspension? Doesn't really matter,they knew he punched her out

TMZ
Posted by Buzzcanadalive at 10:00 AM