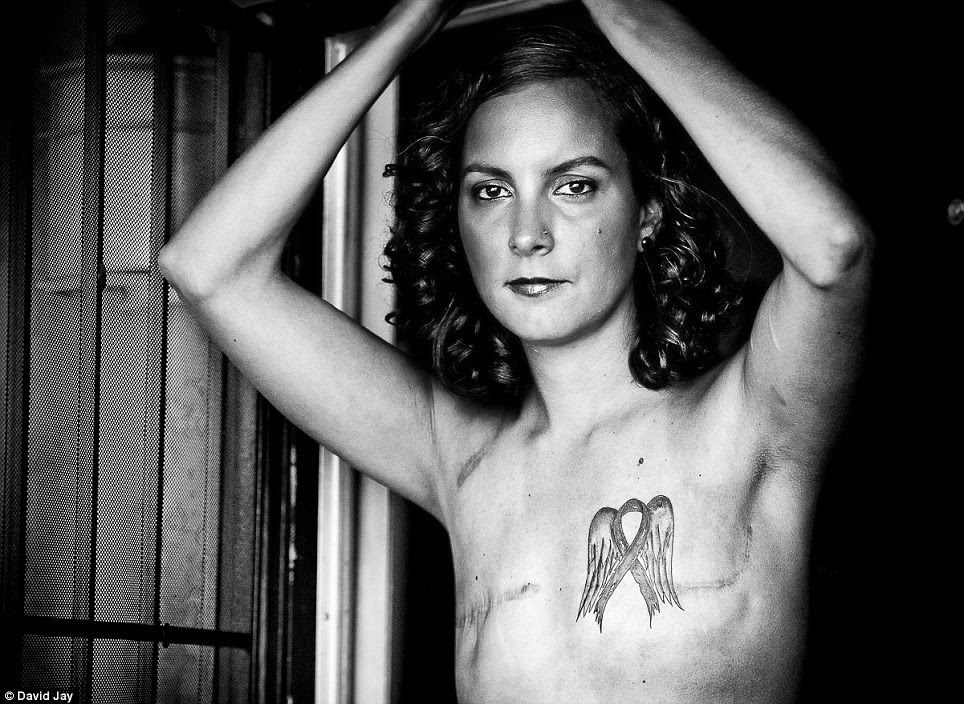 Daily Mail- An arresting series of photographs of breast cancer survivors bearing the scars of their battles with the disease depict the confronting reality of its aftermath on the body.
International fashion photographer David Jay started The SCAR Project in New South Wales' capital of Sydney after a close friend was diagnosed with breast cancer at 29 years of age.
The collection of colour and black-and-white photos depict the raw emotions of the survivors with their mastectomy scars who show them off with pride His friend, Paulina, had the surgery done within two weeks of being diagnosed and Jay described her as a 'beautiful, strong young woman'. 'I had taken Paulina’s picture a hundred times since she was 17,' he said.
'I saw her soon after her surgery and knew I would have to shoot her again.
'I took her picture because, perhaps as a photographer, taking pictures is my way of confronting, understanding and accepting the things I see.' Despite National Breast Cancer Foundation (NBCF) bringing the project back to Australian shores, Jay was adamant the photos were not about breast cancer.

He said one of things the photos were about was reality and it was 'not always pretty'.
'The images can be uncomfortable for the viewer,' Jay said. 'It forces us to confront our fears and inhibitions about life, death, sexuality, sickness, relationships, et cetera.
'I once read it described as "unflinching".'
The fashion photographer said he had struggled to shoot The SCAR Project because he wanted the pictures to be 'raw, honest, sincere'.
'I knew why the subjects had come - they wanted something beautiful,' Jay said.
'They had already suffered greatly and although I desperately wanted to serve them, I knew in my heart that compromising the visual integrity of The SCAR Project for the sake of easily digested beauty would serve no one.'