Barack Obama to set out 'US offensive against ISIS' 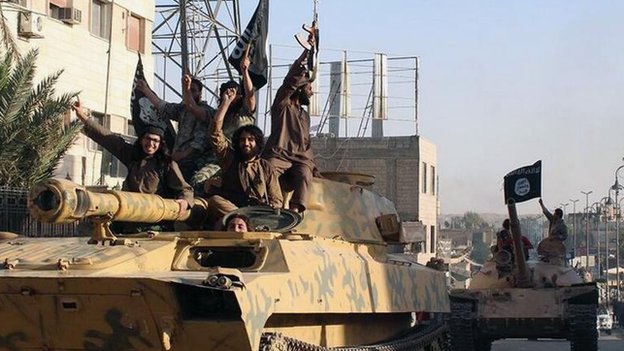 US President Barack Obama is to set out his "game plan" against Islamic State militants in a speech on Wednesday.

Mr Obama, who has been criticised for failing to outline a strategy, told NBC TV the US would degrade IS, shrink their territory and "defeat them".

US jets bombed IS targets in western Iraq for the first time on Sunday.

Meanwhile, the Arab League has vowed to take "all necessary measures" against IS, which has seized a huge amount of territory from Iraq and Syria.

The league gave its backing to a Security Council resolution passed last month calling on member states to stem the flow of weapons and money to extremists in Iraq and Syria.

BBC World Service Middle East editor Sebastian Usher says the Arab League's message will hearten Mr Obama, but the question now is whether its members will fully act on it, and act together rather than against each other.

Speaking on NBC's Meet the Press, Mr Obama said: "I'm preparing the country to make sure that we deal with a threat from Isil."

IS, also often referred to as Isil or Isis, has taken over large swathes of Iraq and Syria in recent months, declaring the land it controls a "caliphate".

Mr Obama went on: "On Wednesday, I'll make a speech and describe what our game plan's going to be going forward

IS fighters have taken large swathes of Iraq and Syria. Here they parade in Raqqa, Syria
He said he would "start going on some offence" against IS.

But the strategy was "not going to be an announcement about US ground troops", he added.

He said: "This is not the equivalent of the Iraq war. What this is, is similar to the kinds of counterterrorism campaigns that we've been engaging in consistently over the last five, six, seven years.

"I just want the American people to understand the nature of the threat and how we're going to deal with it and to have confidence that we'll be able to deal with it."

Mr Obama said the strategy would not involve the US alone but would be one pursued by an international coalition.

BBC
Posted by Buzzcanadalive at 3:00 PM