Canada To Join US Military To Fight ISIS 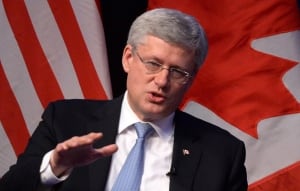 Prime Minister Stephen Harper says Canada is considering a U.S. request for further military contribution in the fight against ISIS in Iraq.

Harper's comments came during a question and answer session with Gerard Baker, editor in chief of the Wall Street Journal, before a business audience in New York.

Asked by Baker if he would rule out "a directly military contribution" to any effort, Harper said no.

"I haven't ruled out — we haven't ruled out anything. We need to have some additional debate within our government before we reach a final decision, but we're wanting to see this be successful. And we want to be supportive as best we can."

Harper revealed, during the question and answer session, the U.S. had formally asked Canada in a letter received this week for further involvement in the fight against Islamic State militants in the Middle East.

"The United States has just recently, in the last couple days, has asked for some additional contribution and we'll — we're weighing our response to that."

When pressed for details of the U.S request, Harper said he preferred not to get ahead of the Americans.

"Since they didn't release the letter publicly, I'm not going to do that. I'll just say the government of Canada will make a decision on that very shortly."

Harper said the matter would be discussed in Ottawa.

"We'll be having some debates in cabinet and Parliament about what additional steps we may be willing to take, but I think this is a very important objective of the [U.S.] president," Harper said.

To date, Canada has deployed 69 special forces advisers in Iraq.

CBC
Posted by Buzzcanadalive at 2:00 PM

Email ThisBlogThis!Share to TwitterShare to FacebookShare to Pinterest
Labels: Canada, Military, Terrorism, US