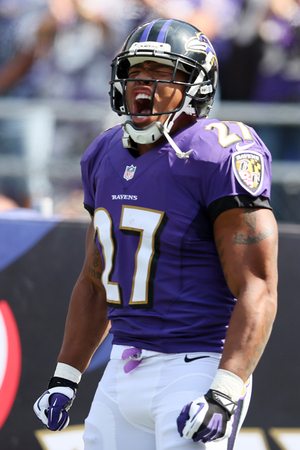 The star running back Ray Rice has been released by the Baltimore Ravens and indefinitely suspended by the National Football League, over a video that appears to show him assaulting his then-fiancee in an Atlantic City casino.

The moves came hours after the celebrity news site TMZ released a video that appeared to show Rice knocking Janay Palmer unconscious with a single punch. In February, the same site released a video that showed Rice dragging Palmer out of the elevator, by her underarms, before dropping her face-down, her dress up and her feet still in the elevator. Palmer and Rice have since married.
Rice had been playing under a five-year, $40m contract extension that he signed in July 2012.


On Monday afternoon, an NFL spokesman said: “[Commissioner] Roger Goodell has announced that based on new video evidence that became available today he has indefinitely suspended Ray Rice.”
After the release of the second video, on Monday morning, observers asked how much the NFL had known about the incident, and when it had known.

The first TMZ video and the fallout from it prompted widespread criticism of Rice and the NFL – in July, after an investigation, the league suspended the player for two regular-season games. Further press criticism, over the relative brevity of that ban in contrast to lengthy bans handed out for drug-related transgressions and other misdemeanors, prompted a turnaround in the NFL’s policy on employees convicted of domestic violence offenses.

Under the amendments to the league’s policy announced by Goodell, players convicted in incidents of domestic violence face an automatic six-game suspension without pay; second offenses will bring lifetime bans. A range of factors, including whether a child was present, whether the victim was pregnant and whether firearms were involved, can lead to a longer initial suspension.

On Monday, debate centered around whether the league and police, who investigated the incident before Rice agreed not to contest a charge of aggravated assault, had ever had access to the new TMZ video. Rice was sentenced to a pretrial diversionary program, approved by a New Jersey prosecutor and superior court judge, and his case did not come to court.

In a statement to TMZ, an NFL spokesman said: “We requested from law enforcement any and all information about the incident, including the video from inside the elevator. That video was not made available to us and no one in our office has seen it until today.”

The ESPN sports writer Jane McManus, however, used Twitter to say: “I was told NFL had access to same evidence the police did when evaluating a two-game suspension.”

“One would have to assume they had this information,” said Ryan Smith, a legal analyst for ABC News, while Adam Schefter, a high-profile NFL reporter for ESPN, said: “It comes down to this. If the NFL had seen that video and suspended Ray Rice two games it’s an embarrassment of the highest proportion.

“And if it didn’t see that video before, then it’s time to go back and revisit that.”

The head football coach at Rice’s alma mater, Rutgers University in New Jersey, said on Monday the college might delete footage of him in action from Knights in the NFL, its in-game promotional film.
“Ray will always be a part of our family,’’ said Kyle Flood, at his weekly news conference, held before Rice’s release and suspension was announced. “The video I saw this morning was difficult to watch. As a husband and as a father, there’s nothing that could justify what I saw on that video.”
Posted by Buzzcanadalive at 6:13 AM