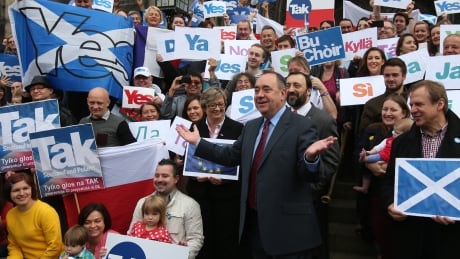 Quebec sovereigntists are watching closely as Scotland heads to the polls for its historic September 18 vote on independence.
A number of Quebec sovereigntists, including representatives of the Parti Québécois, are heading to Scotland this week to observe the vote and bring back ideas for breathing new life into their flagging movement back home.

Andréanne Villeneuve is one of those making the trip.

“It will maybe prove the shot in the arm for independence in Quebec that we’ve been waiting for,” she told CBC News.

One idea the PQ is already promoting is a Scottish-influenced approach to questions of immigration and cultural diversity in Quebec.

That means putting to rest the ghosts of the controversial secular values charter promoted by the recent PQ government under Pauline Marois, which wanted to ban the wearing of overt religious symbols by members of Quebec’s public service, as well as former PQ leader Jacques Parizeau’s blaming the “ethnic vote” for the 1995 referendum loss.

“I think we have to do the same here in Quebec. We have to make sure everyone is welcome and they have a place here in the Parti Québécois,” said PQ MNA Alexandre Cloutier.

Sovereignty supporters are also pointing to the simplicity of the six-word question that Scottish voters will be asked to answer 'yes' or 'no' to: "Should Scotland be an independent country?"

The question that voters in Quebec’s 1995 referendum on independence had to answer was 43 words long and was widely criticized for being unclear.

“Perhaps the British government was confident that this this clear kind of question would repel voters,” he told CBC News. “Now, independence is something they might have to accept.”

All of these lessons are food for thought for the PQ and are helping them with their strategy for the next general election in Quebec.

“We take the next four years to renew the substance, the content, the arguments, to show Quebeckers that it would be to their benefit,” said PQ MNA Bernard Drainville.

Potential PQ leadership contenders are even pledging to hold off on any referendum in their first term in power.


“Let's build Quebec, build its economy, build its social net and come back later on this issue,” said PQ MNA Jean-François Lisée.
Posted by Buzzcanadalive at 8:00 AM