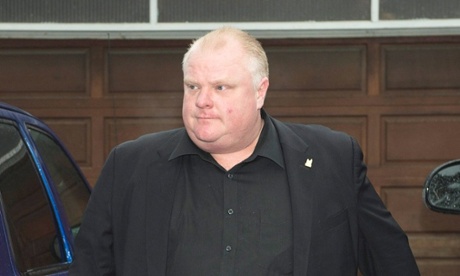 Controversial Toronto mayor Rob Ford has withdrawn from his re-election race only hours before a deadline to set the final ballot in the election. His brother Doug is reportedly trying to replace him as a candidate.

Ford, who became famous internationally after videos surfaced of him smoking crack cocaine, was admitted to hospital on Wednesday after complaining of stomach pains while eating breakfast and was diagnosed with a tumor in his abdomen.

In a statement Thursday, Dr Zane Cohen of Mount Sinai hospital in Toronto said that there would be no updates on Ford’s condition for “about a week,” until results of a biopsy on the tumour become available
Posted by Buzzcanadalive at 12:22 PM