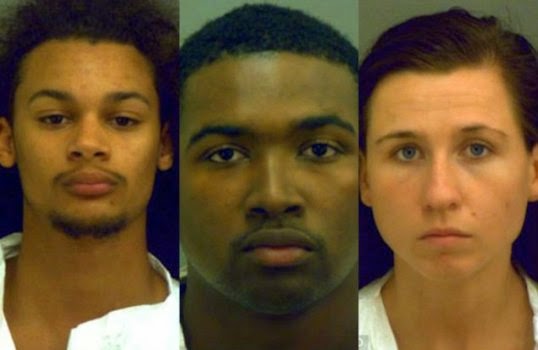 20 year old Texas soldier, Dartarious Graham, (pictured centre) has been charged with capital murder after his 2 year old daughter Peyton was found unresponsive with ‘suspicious’ injuries in his home in Fort Bliss, Texas. According to police, the young father beat his 2-year-old daughter to death after he became upset that she had soiled her diaper.

They also arrested Graham’s cousin Robert Franklin, 19 (pictured left), for witnessing the attack and not doing anything to help the little girl. The child's mother Elizabeth Graham, 23 (pictured right) was charged with injury to a child by omission for no protecting the child and failing to report the abuse which had been constant before the fatal beating...


According to reports, Graham, who is a US army specialist, became very angry after his daughter soiled her diaper. He then took her to his room where he beat her for several minutes with a belt.

According to police, his cousin Franklin saw him take the child to his room, looked through the door and saw Graham beating the little girl but did nothing to stop him. He reportedly walked back to the sitting room to watch TV.

Franklin later told police that Graham continued to attack the girl until she became limp. They called 911 in panic and Peyton was transported to El Paso Children’s Hospital, where she was pronounced dead an hour later.

The police learned the father had a history of beating the child and nobody ever did anything to protect her. All three are being held in El Paso County jail. Dartarious Graham could face the death penalty or life without parole if convicted.
Posted by Buzzcanadalive at 4:00 AM