US elephant keeper trampled to death 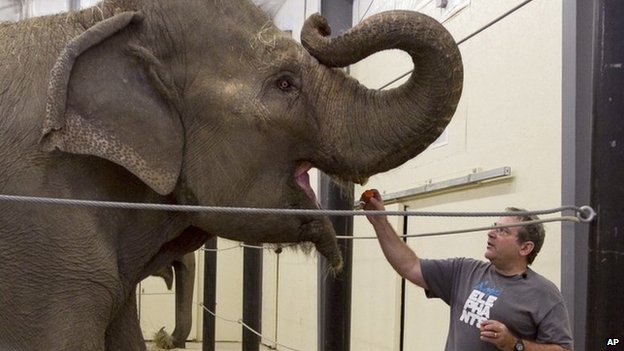 The co-founder of a home for retired circus elephants in the US state of Maine has died after one of the animals stepped on him, police have said.

Vet James Laurita, 56, had fallen at the barn of Hope Elephants. Officials ruled his death an accident.

He established the home with his brother in 2011, decades after he worked as an elephant handler at a travelling circus.

Hope Elephants' board said it was "deeply saddened" by the loss.

"Jim's passion for all animals, but especially elephants, was boundless," they said in a statement in which they asked for privacy for his family.

Laurita also worked with elephants at the Bronx Zoo and at Wildlife Safari in Oregon, according to the Portland Press-Herald newspaper.

He had apparently fallen and struck his head on a concrete floor before an elephant stepped on his chest.

"The elephant was not aggressive in any way. It was clearly an accident," said Mark Belserene, of the Maine state medical examiner's office.

Mr Belserene added Laurita's official cause of death was "asphyxiation and multiple fractures caused by compression of the chest".

BBC
Posted by Buzzcanadalive at 8:00 AM

Email ThisBlogThis!Share to TwitterShare to FacebookShare to Pinterest
Labels: Animals, Farewell, RIP, US