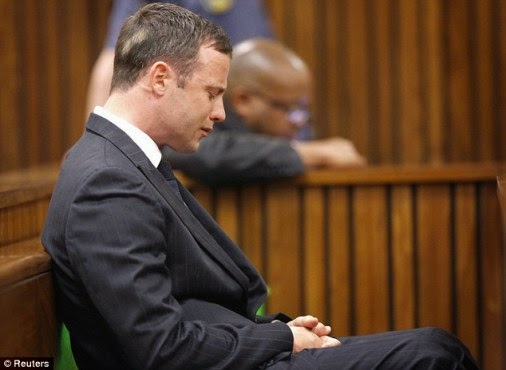 Judge Masipa has read much of her judgement and she's just found Oscar Pistorius not guilty of murder. The judge said there were not enough facts to prove the most serious charge of pre-meditated murder. She said the case was based entirely on circumstantial evidence and dismissed the witness testimony. She said the witnesses were unreliable as they were confused when giving testimony and said most of what they said weren't accurate. She said even if Oscar was evasive with some facts, and was a 'very poor' witness, it doesn't mean he's guilty of murder.

She explained that Oscar's reaction after killing Reeva shows he didn't have criminal intent, hadn't foreseen he'd killed her. She said he could not have faked his reaction minutes after the shooting. She even dismissed the whatsapp message between the lovers, saying relationships are dynamic. She also said evidence did not support the state's claim of second degree murder.

"The state has not proved beyond reasonable doubt that the accused is guilty of premeditated murder. There are just not enough facts to support such a finding'- she said.

While he's not guilty of premeditated murder, he awaits to find out if he's guilty of culpable homicide (manslaughter) which is the negligent death of another. It means there was no intention to kill but the killing is unlawful. The court has adjourned for early lunch.
Posted by Buzzcanadalive at 11:00 AM