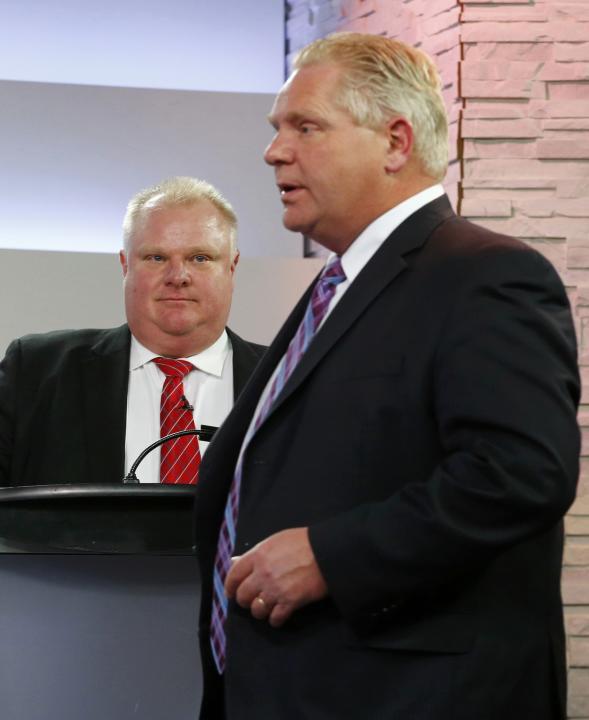 Doug Ford is running for mayor of Toronto in Rob's stead.

But does he have the same chances that his brother did to win?

That's the question facing pollsters after a day of dramatic changes in Toronto's political landscape.
Rob, whose tumour diagnosis was revealed Wednesday, will now vie for a council seat in his old Etobicoke ward while his nephew Michael runs for school trustee in a neighbouring ward.

The most recent Forum Research poll from Sept. 8 showed that Rob trailed John Tory in the mayoral race by just 12 percentage points, with 28 per cent support against Tory's 40 per cent. Another poll conducted by Nanos Research between Aug. 27 and 31 showed Tory at 42 per cent support and Rob Ford at 28 per cent.

UPDATE: A poll conducted by Forum Research Friday night found newly entered mayoral candidate Doug Ford in second place with 34 per cent of voter support. John Tory led the poll with 41 per cent support, while Olivia Chow held third place at 19 per cent, according to the Toronto Star.


Forum president Lorne Bozinoff told Canada.com that he thinks Doug could still pose a threat.
"He's got the name recognition already, the campaign organization, everything," he told the website.
"If he can pick up where his brother left off ... he's got six weeks to close a 12-point gap, I think that's possible."

A poll commissioned by Ipsos-Reid last November, after Rob had admitted to smoking crack cocaine, found that both Ford brothers had the same credibility at 30 per cent, The National Post reported.

Rob had 34 per cent trust in that poll, while Doug had 30 per cent.

Approval ratings of their job performances were also similar. Doug was at 42 per cent at the time, while Rob was at 40 per cent.

Forum Research also conducted a hypothetical poll in May which found Doug trailing both Olivia Chow (40 per cent) and John Tory (31 per cent) with 21 per cent, according to CP24.

Eric Grenier at Threehundredeight.com said Doug's chances come down to a matter of sympathy.
He said Doug doesn't have the public sympathy that Rob does, but added that he might be boosted by having his brother chasing a council seat.

"This is the Ford family running for the job, rather than Doug alone," he said.

"Some voters who liked Rob but not his brother may still vote for Doug Ford because of this."
Posted by Buzzcanadalive at 3:30 PM