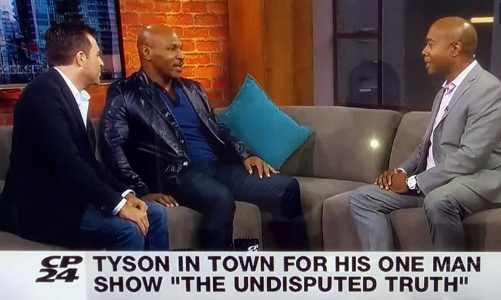 The former world champion is currently in Toronto to perform his critically acclaimed one man show 'Mike Tyson: The Undisputed Truth.', and while there, Tyson met with infamous crack smoking Toronto Mayor, Rob Ford.

While promoting his show the next day (on Wednesday morning) on a popular Canadian morning TV talk show, the host, Nathan Downer, asked Mike if it were a good idea for him to meet the Mayor during an election year considering Mike was a convicted rapist, implying that Mike meeting the Mayor could damage the Mayor's reputation. Mike flipped after that.

Mike called the host a piece of s**t and told him f**k you repeatedly live on air.

When the host reminded Tyson that he was on live TV, Mike responded, "I don't care. What are you going to do about it?" See the video below